This article series will be a summary of about a decade of unpublished research I am trying to organize and share. Not all of it is current, as newer hardware is harder to inspect and reverse. However, much of it is still relevant.

The first post below is an introduction to the different components on the hardware and software side we’ll need to dive into security issues in the next post.

As discussed in the introduction to the SecureBoot post, the Intel CPU has four major component groups – the CPU cores, the L3 (or LLC) cache slices, the ‘Uncore’ or ‘System Agent’ parts, all connected through a ring bus inside the die.

The graphics process is made up from several slices and an unslice (like uncore) area that includes common components. Each slice is divided into subblices and a slice common area. The subslices are made up of several Execution Units (EUs), and Texture unit and a L1 Cache/Memory. The common area includes the L3 cache and the dataport. The limit to the number of slices is the interconnect between them and the unslice. There is always only a single unslice. In the unslice we can find the connection to the ring bus, aptly named the GT interface (GTI), the Command Streamer is reads commands from the system memory and into the graphics processor, the fixed function pipline (FF pipeline), and the thread dispatcher \& spawner that lunch shader programs and GPGPU (General Purpose Comuting) programs onto the EUs. The FF pipeline deals with fixed functions such as vertice operations (called the Geometry Pipe), and other dedicated hardware such as video transcoding.

Different SKUs have different combinations of these. For example:

The graphics engine is also connect streight to the the IOSF (Intel On Chip Fabric internal bus, see the secureboot post bus, through a controller called Gunit. Gunit is connect to both the primary and secondary IOSF and exports functions for communicating with the graphics engine and implementing IOMMU support for graphics memory and unified memory.

All of this is connected to the the display IO interconnect and output to DisplayPort and HDMI outputs.

The 2D graphics gengine is a standonle IP block in the unslice area, and has its own command streamer, registers and cache. It has 256 different operation codes, for example:

The fixed function pipeline in the unslice implements the DirectX 11 redndering pipeline stages: Vertex Fetch -> Vertex Shader -> Hull Shader -> Tessellator -> Domain Shader -> Geometry Shader -> Clipper -> Windower -> Z Ordering, -> Pixel Shader – >Pixel Output. Some of these functions are self contained, but many are implemented using by running shader programs on the EUs in the slices. EUs can send certain operations back into dedicated hardware units.

The EUs are in-order mulithreaded SIMD processing core. Each execution thread is dispatched has its own 128 register space and executed programs called “kernels”. All instructions are 8 channels wide, e.g. operate on 8 registers at a time (or 16 half registers). Its supports arithmetic, logical and control flow instructions on floats and ints. Registers are addressed by address. The EU thread dispatcher implements priorities based on age, i.e. oldest is hight priority, and whether the trhead is blocked waiting on instruction fetches, register dependencies etc’. C

The GuC is a small embedded core that supports graphics sechduling, power managment and firmware attestation. It is implemented in an i486DX4 CPU (also called P24C and Minute IA), altough it seems that since broadwell it has been extended to the Pentium (i586) ISA. It runs a small microkernel call μOS. The GuC μOS runs only kernel level tasks (even though μOS supports μApps). The firmware is written in C with not stdlib. In the GuC we can find supporting blocks: ROM memory, 8KB L1 on core cache, 64KB/128KB/256KB (Broadwell/Skylake/CannonLake) of SRAM memory which is used for code+data+cache and a 8KB stack. It also has power managment, DMA engine, etc’. Communication to the GuC is done through memory-mapped IO and bidirectional interrupts.

The GuC offers a light-weight mechanism for dispatch work the host submits to the GPU. This means the GPU driver does not need to handle dispatch and job queuing, making it much faster. The user mode driver (UMD) can communicate with the GuC directly when required and bypass the need to context switch the main CPU into kernel mode. The kernel mode driver (KMD) uses the GuC as a gateway for job submission as well. This simplifies the Kernel and provides a single point where all jobs are submitted. Communication between the UMD and the GuC is done through shared memory queues.

Why is the GuC interesting? Because I think it can communicate with the CSME, CPU and GPU and everything over the IOSF, and if it has bugs it can be used to gain very privileged access to the system and memory.

At system startup GuC is held at reset state until the UEFI firmware initializes the shared memory regtion for the GPU. Inside the shared region a special subregion call WOPCM is set aside fur GuC (and HuC) firmware. It then releases the GuC from reset and it in turn starts executing a small non-modifiable Boot ROM (16/32KB in size) that initializes the basic GuC hardware, and waits for an interupt signalling the firmware has been copied to the WOPCM region. The GuC firmware is an opaque blob supplied by Intel as part of the GPU KMD, which copies it to the shared memory region (GGTT) and signals the Boot ROM with an interrupt. The bootrom verifies the firmware with a digital signature using a SHA256 hash + PKCSv2.1 RSA signature, and if the test passes copies it to SRAM and starts executing.

The GUC firmware can be extracted from the graphics driver and reversed. Screenshot of IDA open on the kabylake GuC: 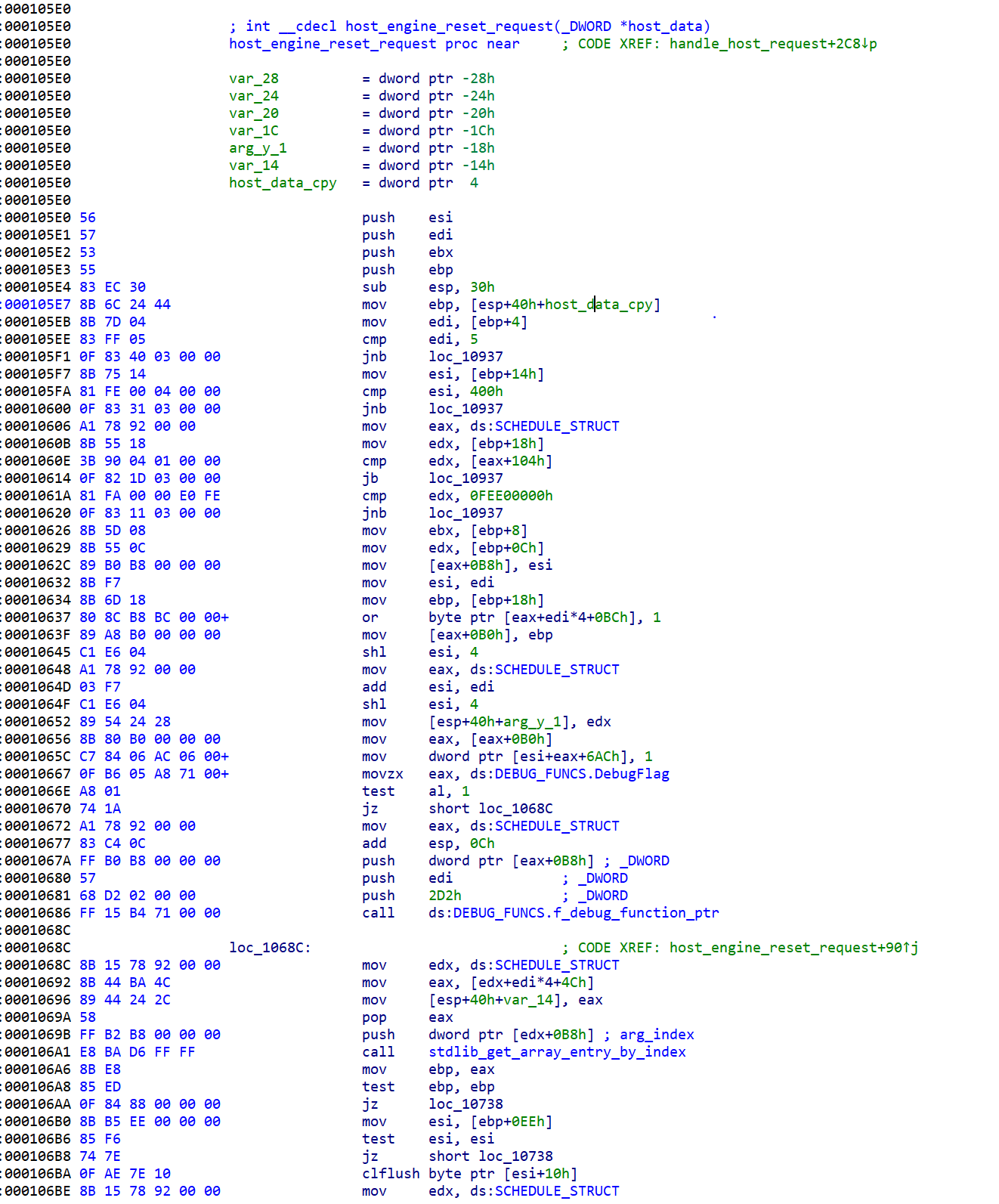 The GuC also attest the firmware for the video decoder unit, called HuC. The HuC is an HEVC/H.265 decoded implement in hardware.

The μOS kernel runs in 32-bit protected mode, with no paging and old-style segments model (CS, DS, etc’). All code run in ring0. The OS handles HW/SW exceptions and crashes, and supplies debugging and logging services.

Interrupts are handled through the local APIC – I found interrupts coming from the IOMMU, power managment, display interfaces, the GPU and the CPU.

It runs a single process – which initializes the system and then waits for interrupts/events in a loop.

Communication with the OS

Commands are dispatched through a ring buffer work queue. Each work item has a header followed by a command. Once a command is posted the CPU notifies the GuC using a “doorbell” interrupt.

So far we only discussed hardware. The software part of the graphics stack is divided into three levels: UEFI DXE, kernel mode and user mode.

Traditionally VGA support was implemented with a legacy Video VBIOS as an PCI option ROM. In UEFI VBIOS was modified into a DXE driver call the Graphics Output Protocol (GOP), which support basic display for the UEFI setup menu and for the OS bootloader. The GOP is supplied by Intel to the UEFI vendor. The GOP supplies two basic functions:

The Windows boot-loader uses the GOP to setup a memory mapped video framebuffer before entering VBS, and after the hypervisor and SK are loaded the access by winload is only through the framebuffer without invoking the GOP. Windows also uses the GOP for disablig blue screens.

On Windows, Intel supplies a fairly large graphics driver that implements both the user mode driver (UMD) and kernel mode driver (UMD). Applications using Direct3D communicate through the D3D runtime to the DXGI abstraction interface (in dxgkrnl.sys), which in turn communicated with the KMD. The KMD treats 2D Blt and 3D operations through different pipelines and dispatches the operations to the GPU.

The GPU driver is riddled with telemetry, but I haven’t figured out yet how much of it is sent automatically to Intel, altough crashes are sent through OCA – Online Crash Analysis.

A very important job of the graphics drivers (both KMD and UMD) is memory managment (GMM). The Graphics Memory space is the virtual memory allocated to the GPU, and is translated using the system pages tables to the physical RAM. The memory contains stuff lime geometry data, textures, etc’. The GPU hardware used Graphics Page Tables (GTTs) to decode virtual addresses supplied by the software graphics memory space into hardware. The use of MMUs and page tables on both ends (sw \& hw) has three main benefits: virtualization, per-process isolated graphics memory and non-contiguous physical memory for better utilization.

The GTTs come in two variants:

The GMM part of the KMD handles and tracks graphics allocations, manages the GTTs, caching coherence, stolen memory allocation and something I won’t go into right now called swizzling. The GMM is essential for performance as it allows memory to be setup by the CPU and then accessed by the GPU directly without copying from system memory to GPU memory.

Its important to note that in modern system the whole system memory can be used for graphics. The driver reports fictious “dedicated” video memory probably to fix old games. 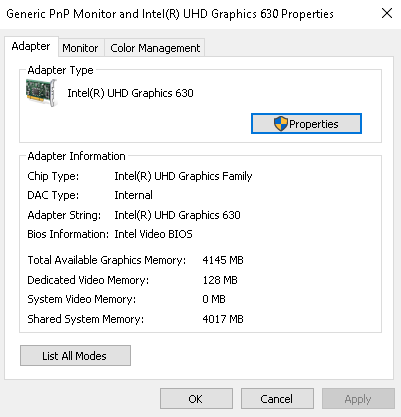 Security-wise, the graphis driver needs to make sure user process can gain access only to memory allocated to that process, and is cleared before transferring the memory to a different process.

The Intel GPU have added support for another organic memory model, the OpenCL SVM model. In SVM mode the GPU and CPU share the exact same page table, so data structures can be shared AS-IS between both, including embedded pointers and such. Five levels of SVM are supported.

Both the CPUs and GPUs have a complex memory heirarchy involving many caches. For example:

GPU memory accesses do not pass through the CPU core’s L1+L2 caches, so the GPU implements snooping to maintain memory-cache coherency. The GPU basically sniffs the traffic on the CPU L1/L2 caches, and invalidates its own cache (I think this is relevant only to BigCore CPUs, and on Atom this is optional and very costly). The GPU’s transient caches are not snoopable by the CPU and must be explictly flushed. The GPU L3 Cache is snoopable by the CPU on some Intel platforms.

At boot, the operating system and kernel mode drive will detect and query the display devices, initialize a default display topology. After boot up, display config request will be sent to KMD and KMD in turn will configure the GEN display hardwires There are also use cases of display hot-plug during runtime, handled by OS user and kernel mode modules/drivers.

Once the driver is loaded it DirectX initializes it from DxgkDdiStartDevice() which eventually leads to a function that setups the redner table per architecture:

OCA is a mechanism that lets drive store device data and send it through windows update back to the driver vendor. There are two cases of failures:

Umair Akbar is a Senior Information Security Engineer with over 5 years of experience leading the development and daily management of InfoSec systems.

Endpoint Detection and Response (EDR) Systems are NOT Enough

What do I care the open web is dying?

Emulating a Computer: The CHIP-8 Interpreter

ZFS: You should use mirror vdevs, not RAIDZ

This is not a drill: VMware vuln with 9.8 severity rating is under attack

Why mmap is faster than system calls

How We Forced Spotify To Change Their TOS