In an ideal world HashiCorp Vault is neither the first nor last line of defense against an adversary. Most organizations have multiple layers of security, starting at the perimeter and continuing throughout their infrastructure to establish defense in depth. But we’ve built and architected Vault to stand against adversaries that have successfully infiltrated that perimeter.

This characteristic of Vault has become incredibly important with the rise of insider threats and supply chain attacks. Recent campaigns like UNC2452 and ShadowHammer have led to some of the largest data breaches in history, resulting in advanced adversaries having prolonged and undetected access to extremely sensitive systems across the U.S. public and private sector.

This is not the first time that Vault and Vault Enterprise have operated in environments subject to a data breach. At my HashiConf 2020 talk on Adversarial Modeling I highlighted that we are aware of situations where Vault storage backends were exfiltrated and successfully resisted attack against cryptanalysis.

Data encrypted by Vault has been able to stand up to independent attack because of the design of its cryptographic barrier and its encryption at rest — one that uses industry-vetted cryptography and provides options for users to secure their infrastructure pursuant to their threat model.

The Cryptographic Barrier and Unsealing: Protecting Data At Rest 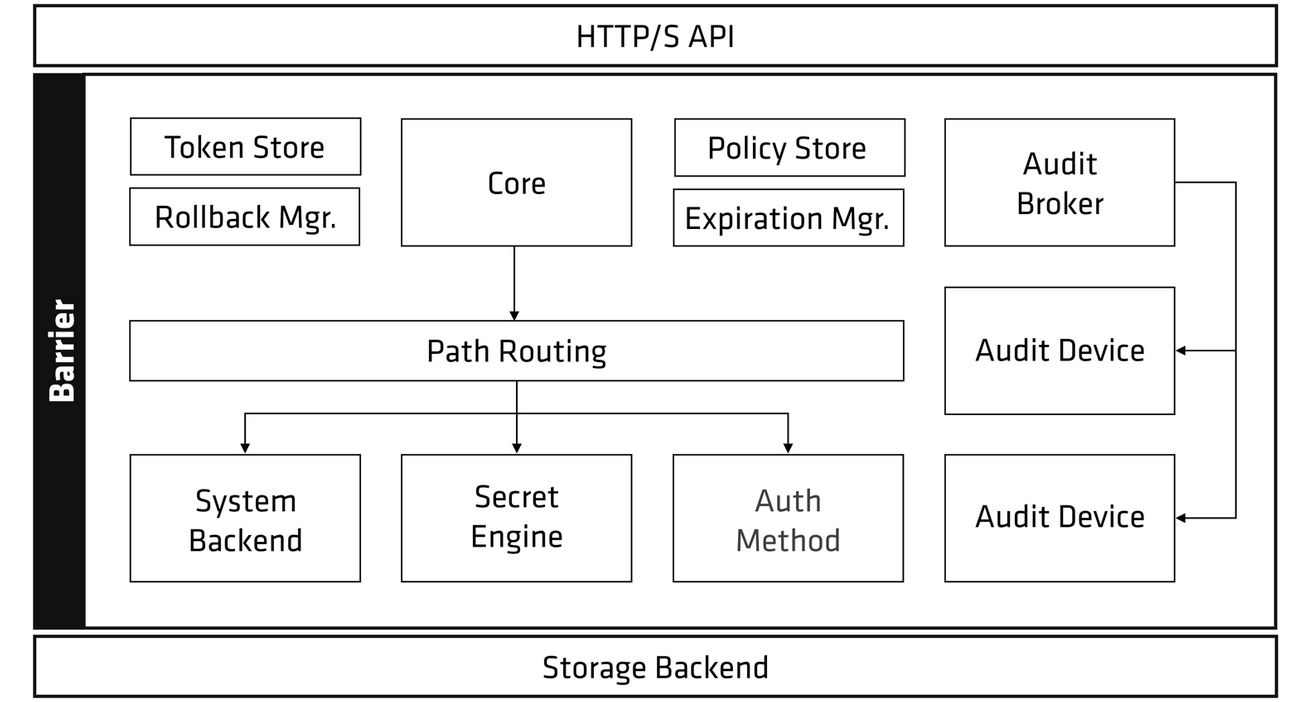 Vault and Vault Enterprise protect their data independent of their host storage system within a structure known as the Cryptographic Barrier (AKA the “crypto barrier”). This is done for two reasons: to allow Vault operators to not be “locked in” to a particular storage or compute infrastructure, and to ultimately ensure that an adversary compromising the storage infrastructure of Vault does not yield access to Vault’s secrets or its sensitive configuration data.

Put another way: if you steal all of Vault’s data, an independent layer of cryptography that is neither controlled nor operated by the storage system Vault “parks” its data on protects this data even after successful breach and exfiltration of Vault’s storage backend.

No Keys to the Kingdom: Unsealing and Secure Key Management

In order to start a Vault server and access the data encrypted at rest, a process known as unsealing must occur. Unsealing can either take two forms:

Regardless of the unsealing mechanism, Vault is designed to specifically complicate efforts for an adversary to steal key material to circumvent cryptography.

Neither approach directly stores the actual encryption key for the data, instead storing material used to generate the encryption keys to access data at rest. This ensures that even if a well-resourced adversary breaches an auto unseal system that they cannot directly steal the keys to decrypt the crypto barrier outside of the unseal process.

Vault goes one step further in ensuring that Vault users and operators never interact with keys used to protect their secrets. The Vault server completely manages the process of retrieving keys from encrypted storage, instead gatekeeping access to those secrets purely in the access control list (ACL) permissions in Vault — as well as Sentinel policies for Vault Enterprise users — for the verified entity attempting to access said secrets.

While this simplifies the process of using Vault and Vault Enterprise for users, it also minimizes the possibility of a privilege escalation or key exfiltration attack. An adversary who has breached a user’s infrastructure cannot steal a user’s key material and use that to attack encrypted Vault data at rest.

Beyond secure management of key material, Vault’s infrastructure is designed to protect and encourage best practices for managing secure access to secrets. This includes:

Vault and Vault Enterprise simplify key management for protecting data at rest to protect against advanced adversaries who have penetrated perimeter security. This ensures that an adversary who wants to steal Vault data cannot “go around” the encryption. They need to go headfirst into Vault’s crypto barrier and breach it through mathematic code breaking/cryptanalysis. This is no simple task.

The ciphers in Vault are chosen specifically because they have been shown to resist cryptanalysis against very well-resourced, skilled adversaries, including those armed with supercomputers and near-term quantum computers.

Data encrypted within the barrier is protected with the Go implementation of AES-256 GCM (Galois Counter Mode). AES-256 GCM was chosen because it was a performant cipher sufficient for protecting extremely sensitive information, including data classified TOP SECRET by the U.S. Government and many NATO nations.

AES-256 GCM remains computationally intractable against attacks to guess its keys and a standard across the private sector and Western military/national intelligence environments for its resistance to cryptanalysis from supercomputers. It also remains secure against known quantum cryptanalysis attacks utilizing techniques powered by Grover’s Algorithm.

Selecting ciphers that are secure against known quantum cryptanalysis has been an effort from the Vault team since the very beginning of Vault and Vault Enterprise. We’ve detailed some of these efforts in previous blog posts.

These features allow Vault to further protect its core cryptography and are often used to satisfy compliance requirements for deploying Vault in certain high-security environments. But all versions of Vault utilize cryptography selected to stand up to adversaries wielding nation-state-level expertise and resources.

Whether we’re protecting against classical cryptanalysis or quantum cryptanalysis the goal is the same: we design all versions of Vault to withstand codebreaking attacks even if an adversary has supercomputers and long-term access to a copy of Vault’s encrypted storage backend.

Beyond implementing secure architecture, the Vault development team and HashiCorp’s security organization have developed a number of additional controls to protect against an adversary’s attempt to weaken or circumvent the protections built into Vault.

These include the following:

One of the most important aspects of secure development in Vault is the community. Vault’s cryptographic libraries and core security are all open source, ensuring that there is a community in the tens of thousands who regularly review Vault’s security foundations. To ensure that the community’s findings translate into continuously improving Vault’s security, HashiCorp has a responsible disclosure program that has been historically critical to Vault’s security in development.

The Last Line of Defense

Vault is designed to serve as an independent, last line of defense for secrets. Situations like the ongoing activity from APT29 highlight the grave importance of this role, and the importance of designing the cryptography and key management protecting Vault secrets to stand up to concerted attacks from well-resourced, skilled adversaries.

Designing secure cryptosystems is a never-ending process. In the future, we may enable users to migrate to new ciphers proven secure against future forms of cryptanalysis. But today and tomorrow, our goal remains the same: the data in Vault is protected with encryption to maintain perfect forward secrecy as much as technologically possible.

An introduction to Ghidra’s primary components

What is the application layer in an industrial network?

Endpoint Detection and Response (EDR) Systems are NOT Enough

How often should I rotate my ssh keys?

Lawyers Automate This, So Why Don’t Airlines?

Why ownership/borrowing in Rust Programming is hard

How Students Hacked Blackboard and Changed Their Grades